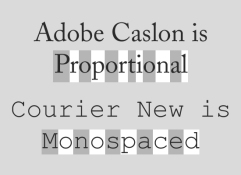 This is because typewriters used a monospaced font much like Courier. Simply, on a typewriter, a W and an I used the same width head to place the character on the paper. Because of that large monospace, it was determined to look better and was easier to distinguish a hard stop in a sentence. This however was not needed before typewriters or today, because back before typewriters as well as today, proportional fonts take up varying widths of space on the page.

This brings up the differences of typists and typographers. Being a designer, I deal with typography every day. It is a general rule that there is one space after a period. When receiving manuscripts or any typed copy from an editor, or copywriter we immediately remove all double spaces after a period and convert all — to an — (en- or em-dash) depending on it’s usage. Look at a book, magazine or newspaper (Justified type blocks need not apply). Do you see any double spaces after periods? No, unless it is a mistake.

I understand old habits are hard to break, but why oh why do I need to keep correcting these issues. If you still use a monospaced font to write letters, fine, but chances are you are not. Comments are welcome, but please spread the word.

5 thoughts on “one space after a period. period.”